In 2015, the Swiss cantons cultivated vines over an area of almost 150 km2. The IVVS (Swiss Vine and Wine Interprofession) has therefore defined 6 major wine-growing regions: Valais (33%), Vaud (26%), German-speaking Switzerland (18%), Geneva (9%), Ticino (7%) and the Three Lakes (6%). The country is small and yet the 6 regions are distinguished by their grape varieties, topographies, climates and soils. 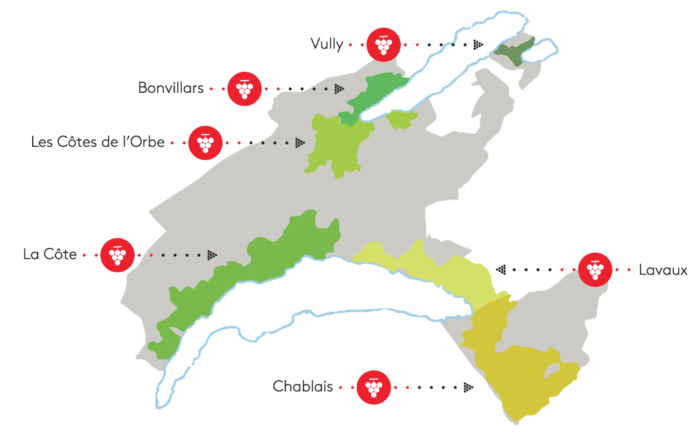 Overall, Switzerland is a troubled territory where the Alps represent two thirds of the country, followed by the Plateau and the Jura. The vines are distributed according to this same key. Compared to European vineyards, they are relatively high in altitude – between 270 m at the lowest (in Ticino) and 1,100 m at the highest (in Valais) – and often in areas with steep slopes. In winter it is not uncommon to see snow in the vineyards and the average annual temperatures are between 9 degrees (German-speaking Switzerland) and 12 degrees (Ticino). In fact, Switzerland is one of the producers of so-called fresh region wines. When Switzerland presents itself to the world, it claims an alpine terroir.